A different variation of an autograph for my collection as I finally have a acquired one of an owner of the Dodgers. Years ago when Frank McCourt was the owner I had the opportunity to get his autograph but I passed on it as I did not think he was worthy enough to use a nice ROMLB on him. This past Saturday as I attended my last regular season game at Dodger stadium I saw current co-owner and President Stan Kasten being interviewed on the field. 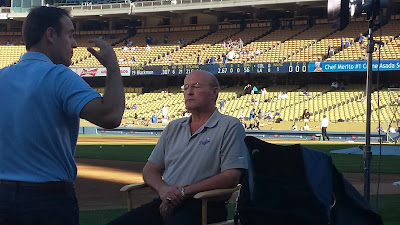 Stan was the President of the Atlanta Braves during their glory years of the 1990's and early 2000's and with the Dodgers matching up with them this week in the playoffs I found it fitting that I could finally get Stan's autograph. I missed him at the Fan Fest back in January as he walked away after signing for a few fans and I wasn't close enough and then missed him also in Spring Training. This time though I and two other fans were the only ones close to him in the baseline section and after his interview I was able to call him over and he autographed a baseball for me. Said thank you and now have added an owner to my collection. This is the first person I have acquired on a baseball that has a connection to a sport but never played a sport. Great job this year Stan and let it continue to the end of October. 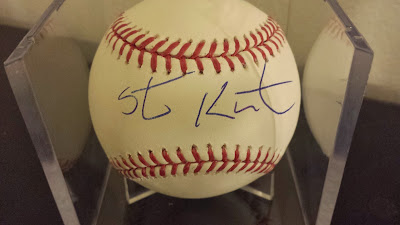