The Dodgers held their yearly La Gran Fiesta this past Saturday in Lot 6 of Dodger Stadium. Unlike the past couple of years I was going to pass on it as no real big autographs were to be had. If this was last year it would have been different as I would have had balls in hand and ready to get multiple autographs but that is not the case this year as I have moved on to photos and for most of the players signing I did not have photos of them.

On Friday I checked out the schedule to see if there were any changes. Low and behold they added Josh Beckett to the schedule. Well, Josh may or may not be retiring after this year but for sure this is his last year on the Dodgers and I still have a photo of him and Drew Butera celebrating after Josh's no hitter. Signed by Drew but still unsigned by Josh. This might be my only chance to get him. I decided to make the venture up to the Stadium and arrived early as gates opened up at 1;30 and Josh was scheduled to sign at 2.

Parked outside and power walked to Lot 6 when the gates opened and was greeting with a new sign that I have never seen but I hope the Dodgers use in the future for these events. 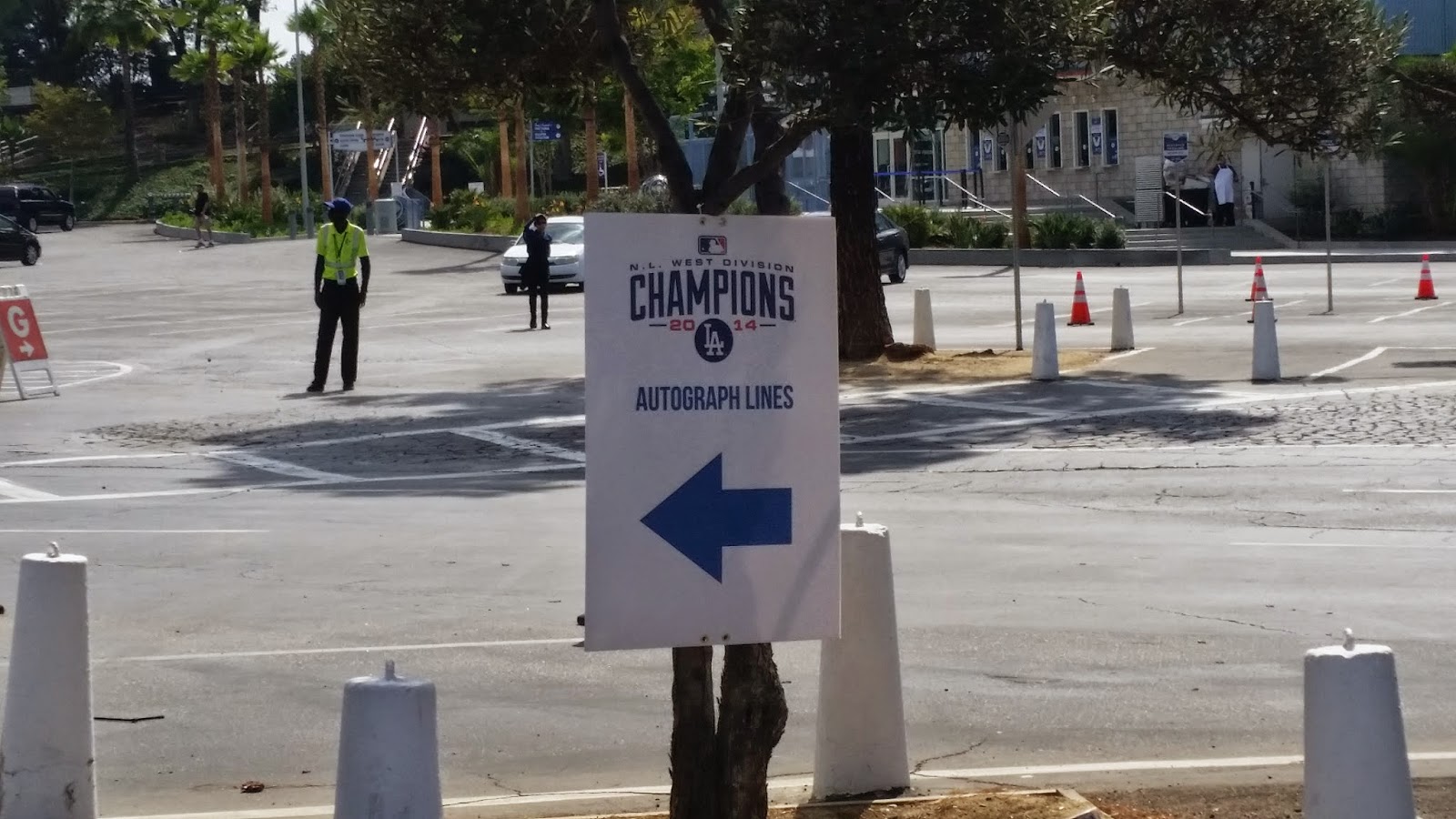 About time they had a separate entrance for autograph seekers while people not interested in that type of thing had their own entrance. I hopped in line and was probably about the 50-60th person. Even for just a hour session I knew I would get the autograph if I knew which line Josh was going to be in. Last year's Dodger Fest was a mess as you didn't know who was going to be in your line and you just received the luck of the draw. Hoping for the best when this nice young lady usher came walking by and I along with everyone else took this pic : 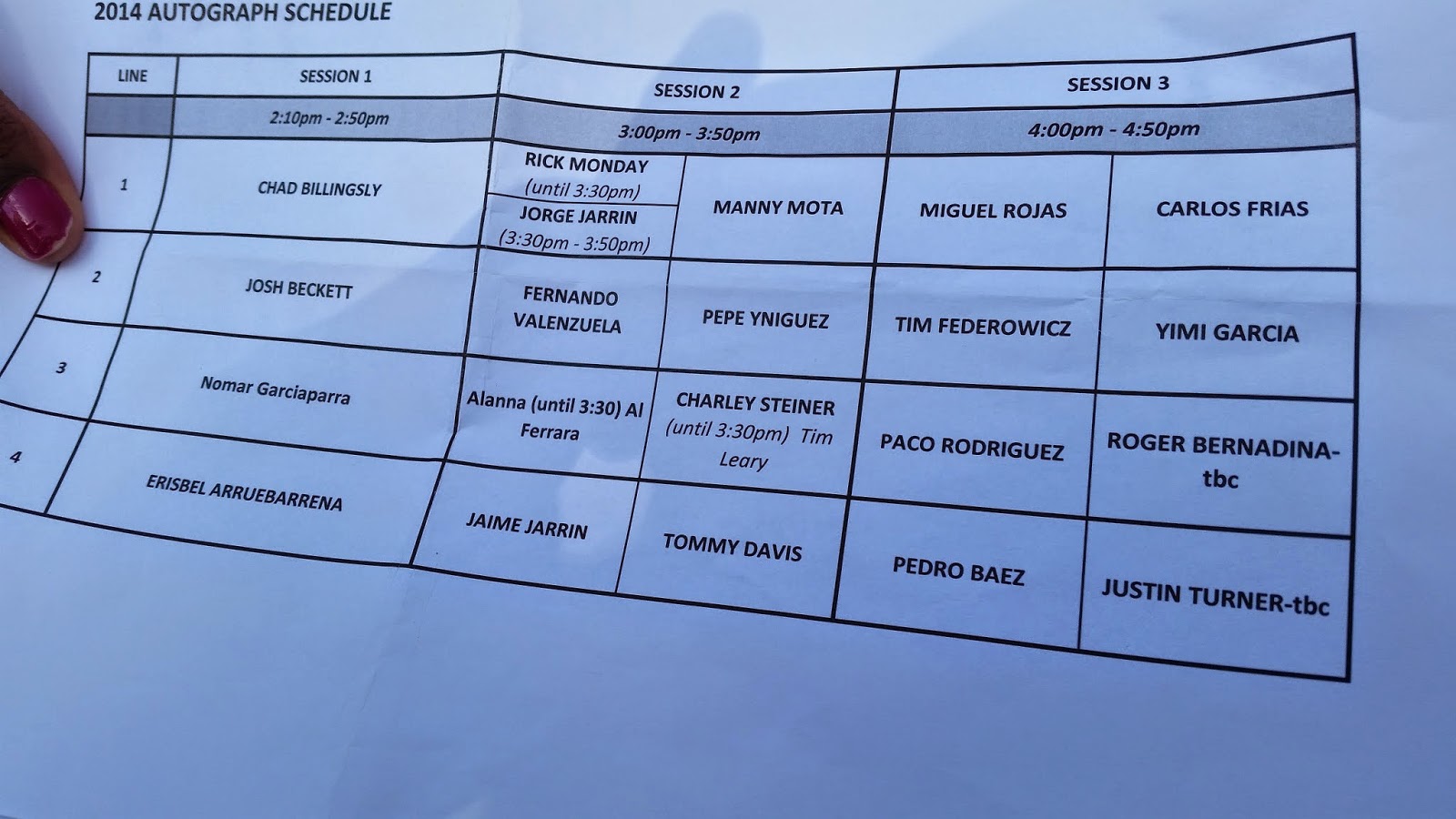 Oh yeah.
A schedule of when and where players would be signing. Josh was in line 2 so that was the line I was heading to. I ended up being about the 30th in line when I took my place but by the time 2 arrived the line had grown to at least 100+. Everyone was in Josh's line with about 50-75 in Nomar's and literally 5 people in Chad's. Well I brought a photo of Chad's so I thought I could get two in the blink of an eye. More on that later. 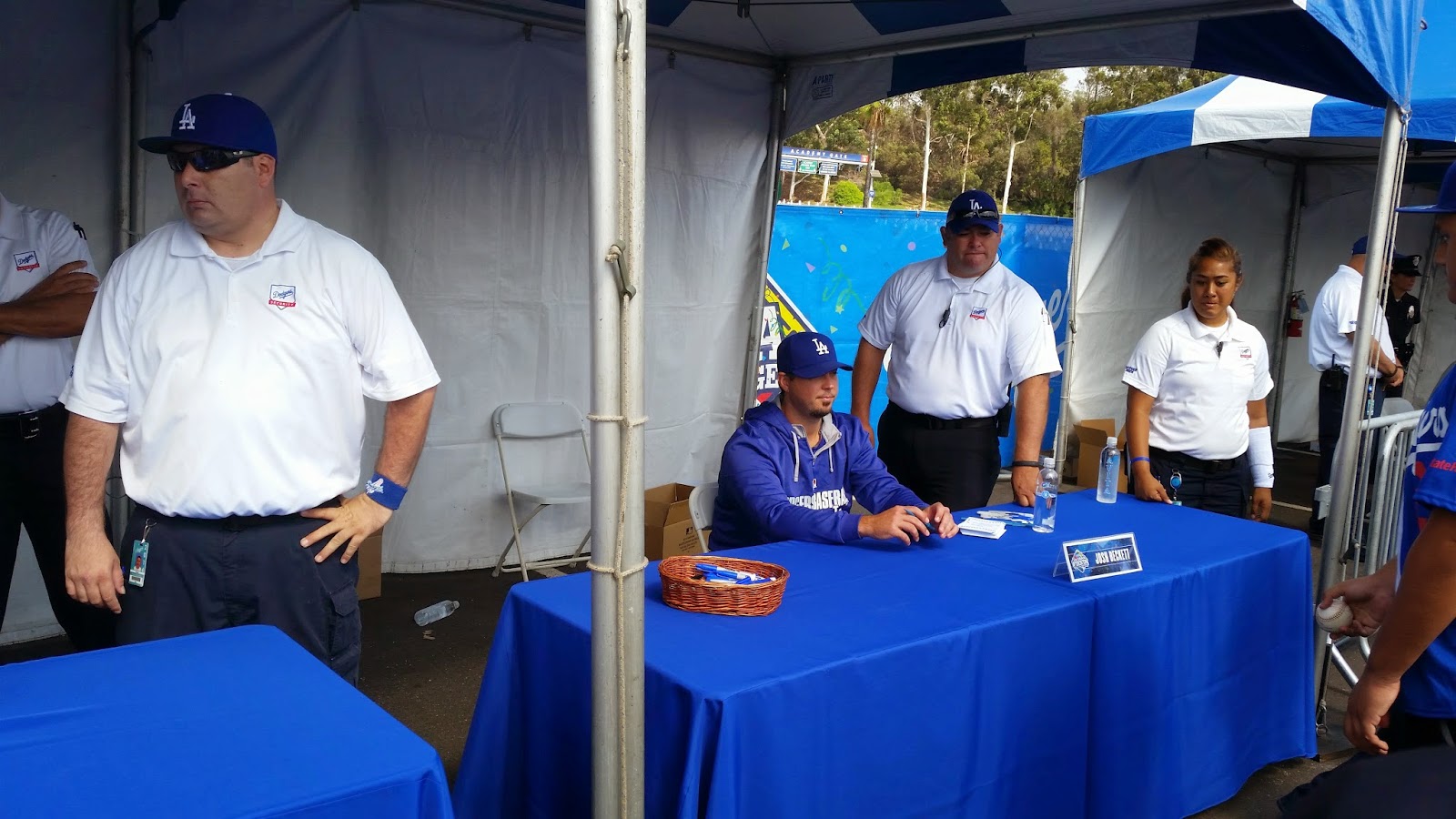 Josh showed up on time and promptly started signing. He was in a decent mood and at least said hello to fans that greeted him. I do appreciate that he showed up and when I got to the table I placed the picture in front of him and he started sign but just not in the place I wanted him to but that's OK I guess as I did get one project done. 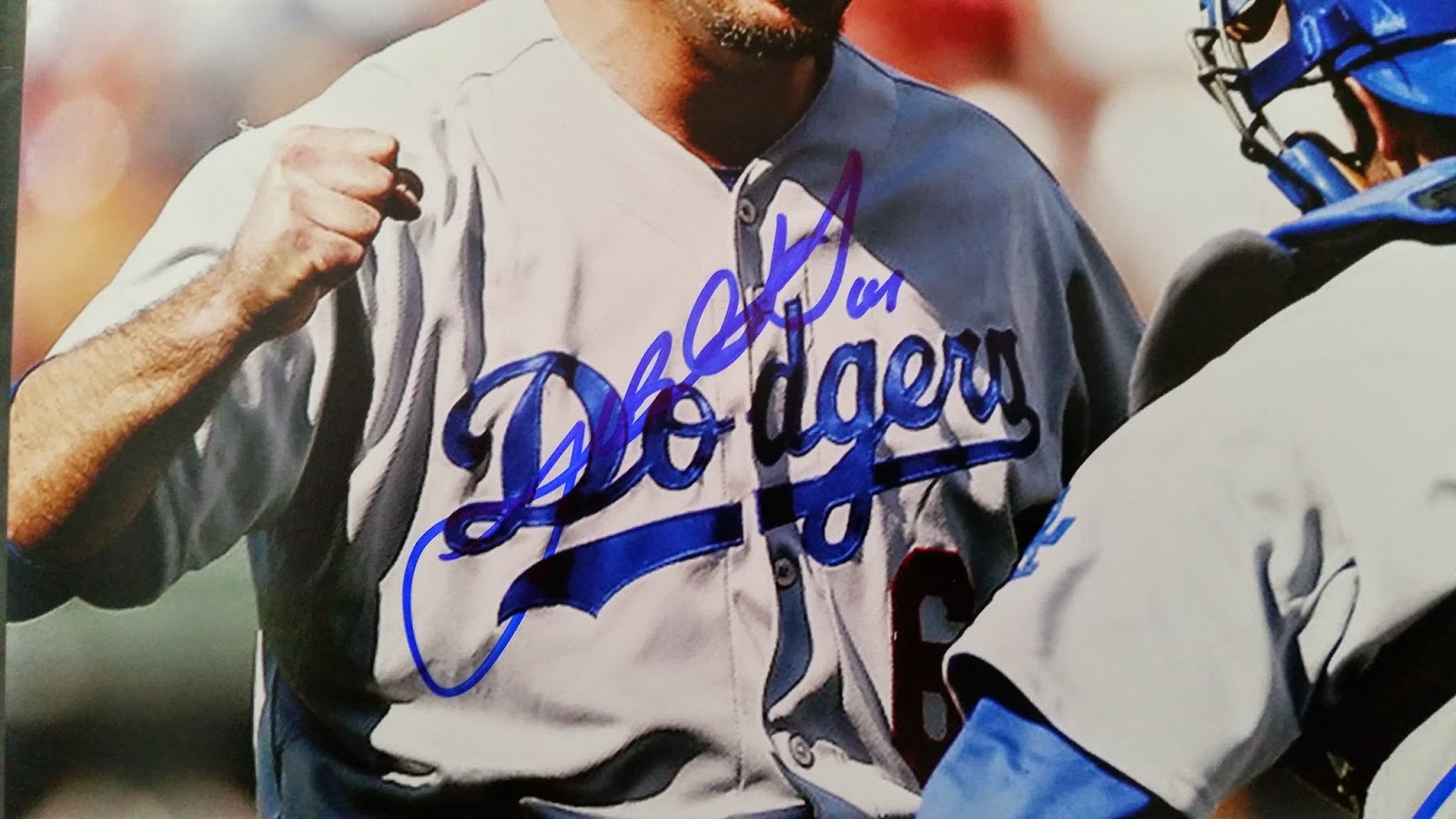 I wanted Josh to sign in between his fist and the Dodgers name so the ink would pop but he did not but I can't get overly picky and I should just be happy that I was able to accomplish my main and really only goal of the Fiesta. Thank you again to Josh for showing up. 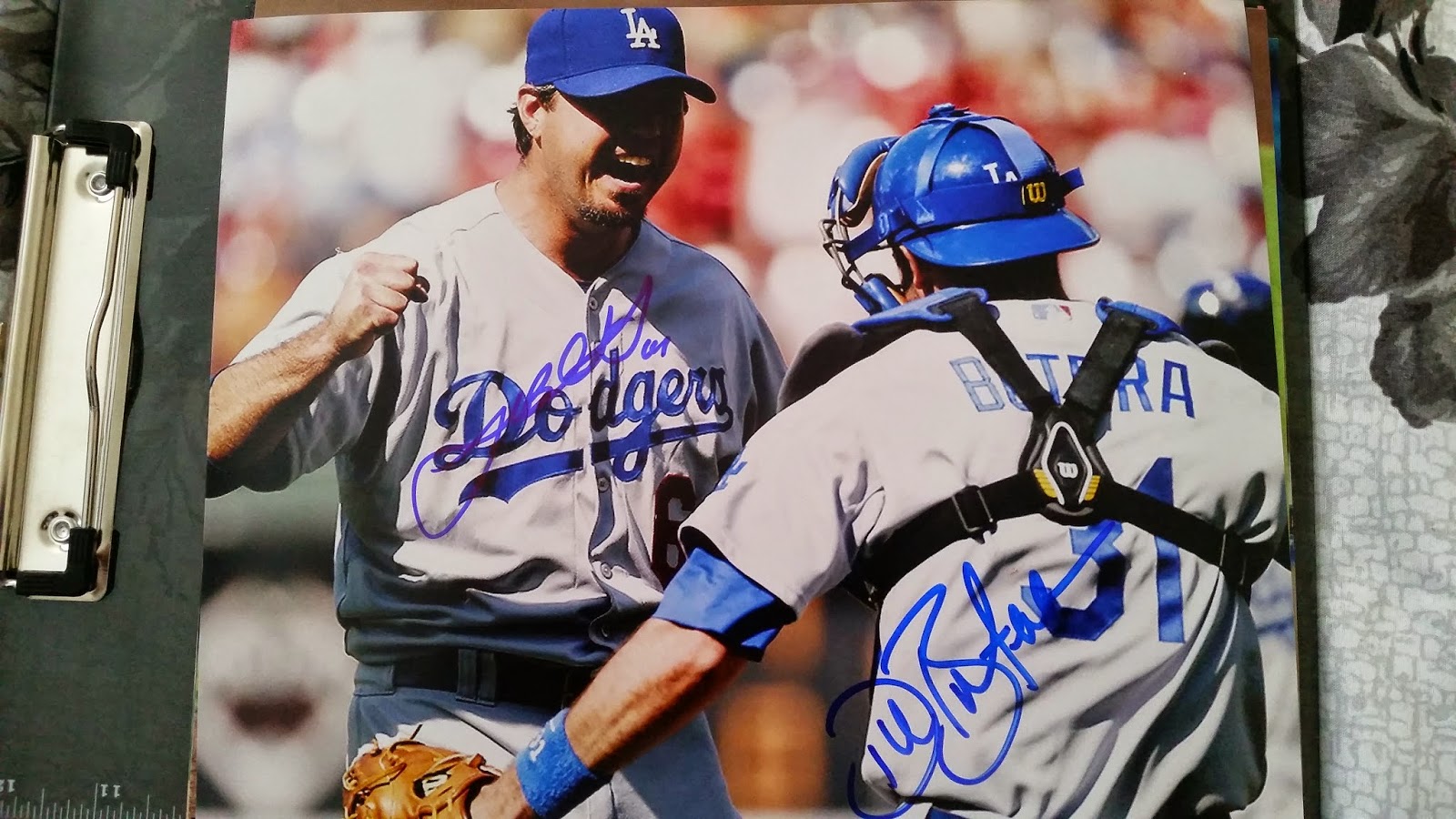 The finished product. Even with the placement of Josh's signature it still is a great finished piece I am adding to my collection.

Well after that we were all informed that to get another signature now or for the rest of the day you must exit the event and wait in line which had grown to 400+ and probably closer to 500. I glanced over and saw that there were literally no people in line for Chad. Everyone was waiting for Josh, Nomar or setting up for Fernando in the next hour. I went over and talked to one of Chad's line handlers and after a little back and forth she allowed me to jump in. I told her it wasn't fair to me or anyone that wanted to get Chad's signature to wait in a line that there was no way would filter down in time to get Chad. Plus Chad looked lonely. 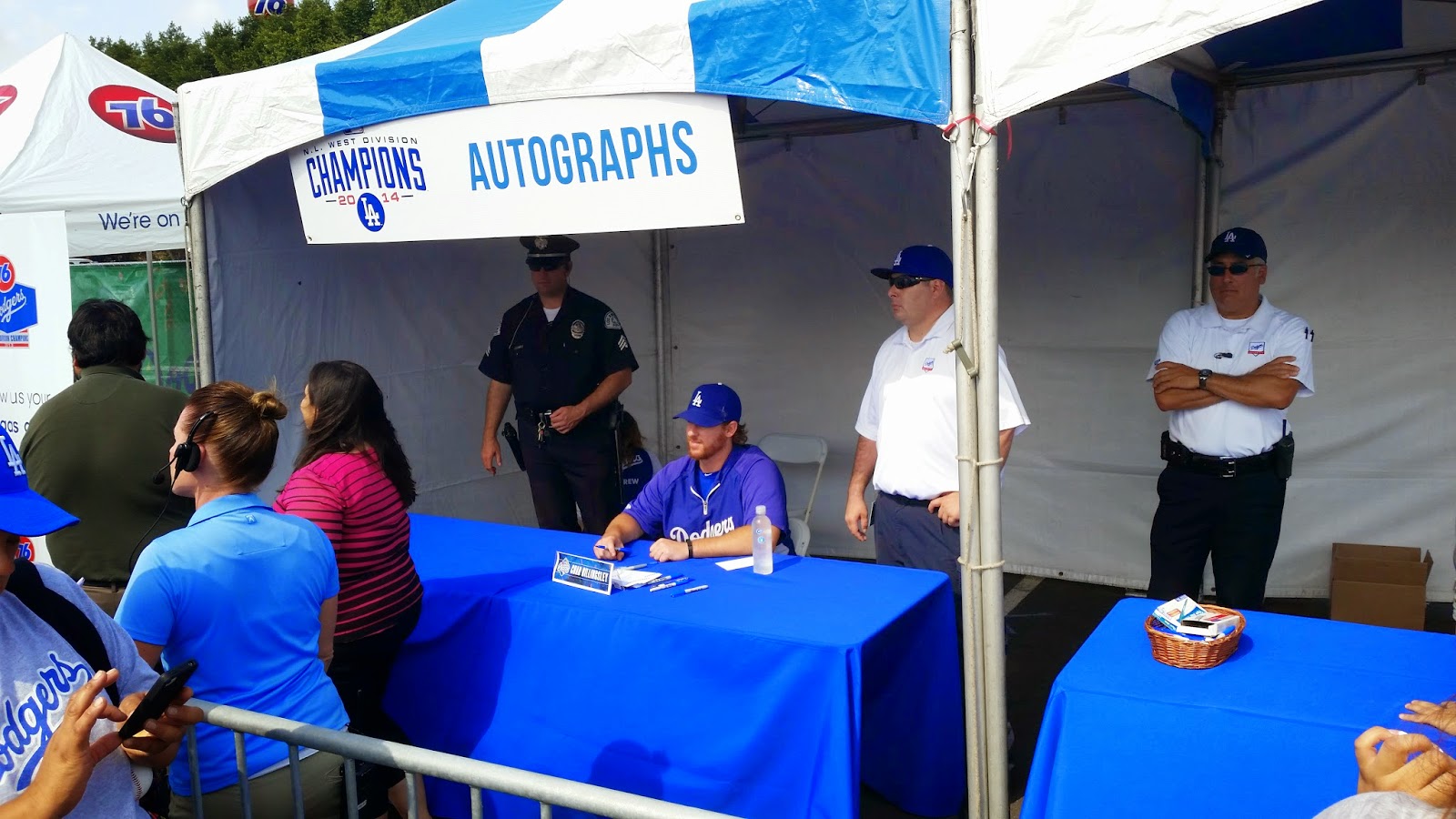 Chad waiting for people to sign for.
Lady with headset is who I struck up a conversation with.
Nice lady. Thank you again to her.

Got to the table and as always Chad greeted me with a smile as I said hello and thank you once again for signing. He has always been a class act for all the times I have met him which is probably at least 6 or 7. Always personable and always engaging. If this is the last time I meet you (his contract is up) then it was great to have you on our team and great to have met you all the times. Good luck in your career but hopefully it will continue with the Dodgers in some capacity. 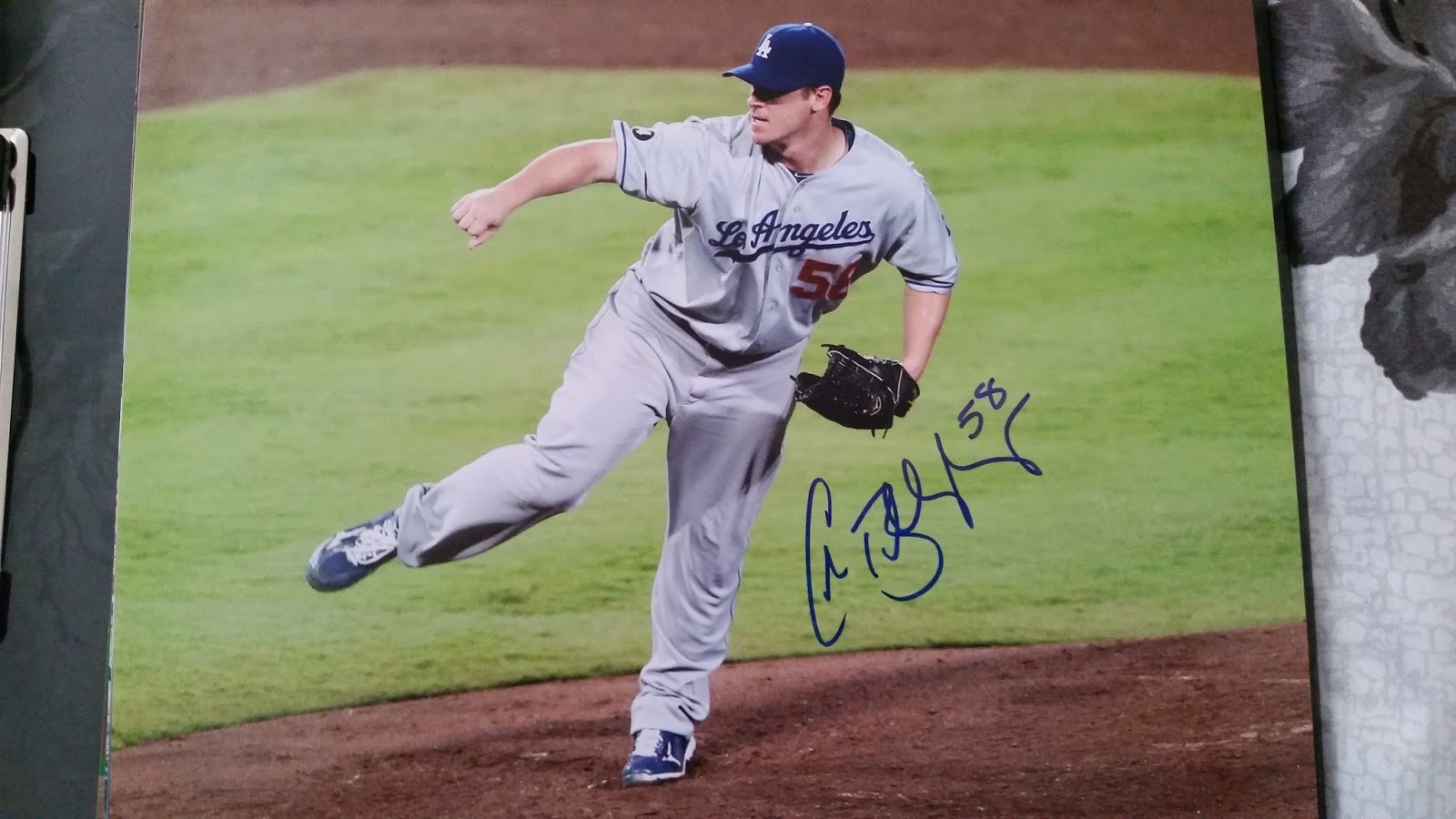 Perfect placement of the autograph

Two autographs down in less than 15 minutes. I looked at the line and even though I would have loved to get Rick Monday's autograph he was only scheduled for 30 minutes and there was no way I would get in front of him in time and I didn't need anyone else in the 3 to 4 hour sessions.

I looked at the 4 to 5 hour sessions and even though I had Paco and Justin Turner photos ready I knew that I could get them next year and I had more things I could do that evening that weren't Dodger related. Plus I got what I really came for so I was happy and content with the day.

Another successful La Gran Fiesta for me and thank you again to the players that showed up and to the Dodgers for hosting the event. Tweek the autograph lines a bit and it will be a perfect event. Till next year.
Posted by DodgerPenguin at 8:51 AM