Left Harry's Dugout in Whittier and headed back to Frank and Sons to pick up my authentication submission. After that headed to downtown LA to pickup up a parking pass for the Angel that night. Noticed the time and saw that it was a few minutes before 1 and since I live in the South Bay area and knew that Steve was doing a signing minutes away from my house I thought I would pass on by to see if there was much of a line.

By the time I got to the store in Hawthorne it was about 1:35 and for most signings that is just too late to acquire an autograph but since it is a of a retired coach I assumed the line might be manageable. Drove by and saw that the line was about 15 deep with 20 minutes left in the scheduled appearance time. I go do this easy.

Hopped in line and was in the store within 5 minutes and in front of Steve 5 minutes more. I was wearing my American jersey since I was going to an Angel game later that night and Steve gave me crap for it saying I should be wearing Dodger gear but I feel a little weird wearing it there if the Dodgers aren't playing and I am for sure not wearing any type of Angel gear. Asked him to sign in it on the sweet spot which he cordially did and asked for a picture which he ok'd as well. Thank you again Steve for appearing.

Well that was my 3 acquired autographs in a few hours span on Saturday and this with me driving all over the place as well with all the traffic. Now it was time to head to Angel stadium where I hoped to get more autographs. Did I? 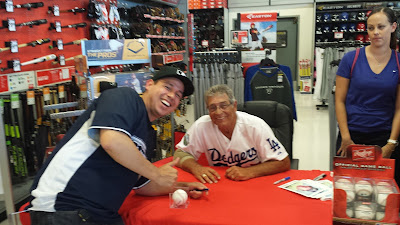 Yet another blurry picture from Saturday. Terrible picture of me as well. 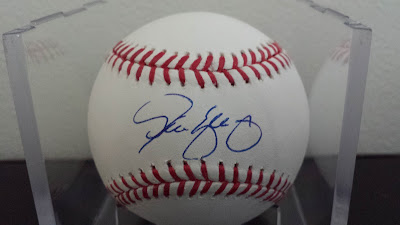 Posted by DodgerPenguin at 9:04 AM