. . . and after the jaunt on the 5 fwy from OC Dugout I finally made it to Harry's Dugout in Whittier. Lesson learned for traveling. Better to take 91 to 605 than the 5 to 605 even though distance wise it is closer. Time wise obviously it was not.

Arrived to Harry's and surprisingly there was only 3 people in front of me. I thought there would be a bigger turn out for Dennis as he doesn't do autograph appearances out here and he is one of only a handful to pitch a perfect game. Saw Eddie the store owner and bought my ticket and made sure I received an inscription as I wanted him to inscribe the perfect game on the ball. Dennis was very personable and talkative with the people in the store. We were all Dodger fans and he was having fun with us stating "sorry" referring to the perfect game which he pitched happen to be against the Dodgers. Love when players or ex-players interact with fans.

Got up to the table and handed him the ball and he signed and inscribed as requested. Asked if he would take a picture with me and said no problem. At least this one game out better than Jose's. In the end I added another autograph of the perfect game club to my collection. Signature looks great and legible. Thanks again to Harry's Dugout for having the event and thank you to Dennis for coming out. 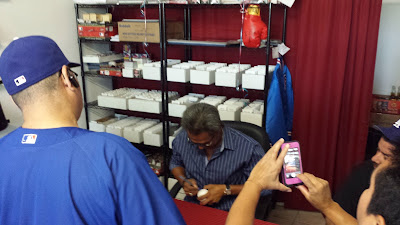 Dennis signing for another fan. 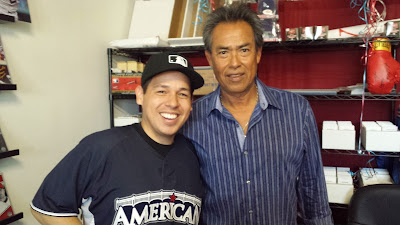 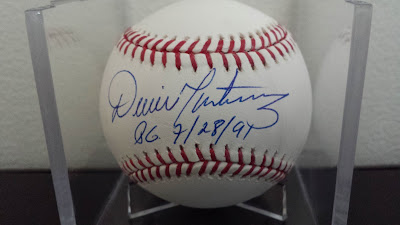 Posted by DodgerPenguin at 9:25 AM