Dodger season might be over but autograph hounding is year around hobby and former Dodger pitcher Stan Williams made an appearance yesterday at El Tepeyac Café.

Stan had a 14 year career where he played for 6 different teams but his best years where his first 5 in the league when he was on the Dodgers which included a championship run in 1959. The Dodgers first since moving west from Brooklyn. While he did well after being traded to the Yankees in 1962 and in subsequent years he statistically was best while on the Dodgers as he won 57 of his career 109 victories with them. He retired in 1972.

Prior to yesterday I haven't seen Stan do any public appearances around the L.A. area and that might be because I just didn't know about it. I love acquiring autographs from Dodger players during their glory years in Los Angeles which were 1959 through 1966 when they played in 4 World Series while winning 3 of them. Stan was scheduled to sign from 5p.m. to 7p.m. and the wife and I arrived early to have dinner as I didn't expect too much of a turn out. Once dinner was out of the way we made our way to the line that formed outside which was no more than 30 people which seemed about right. The line moved very slow and we were in it for almost a hour. A few people in front of us had loads of stuff getting signed ( cough dealers cough ) which caused the snail pace. Another reason was that Stan was talking to everyone which was nice to see. Chit chat is appreciated by this autograph collector. We got to the table where Stan was and proceeded to have him sign the ball I brought. A nice smooth signature. Asked if I could have a picture with him and he happily obliged. As a side note he asked if the young lady (wife) that was taking our picture was my daughter. Ha Ha. Told him no that was my wife and he said very beautiful and eventually told her as well. Love that even at 77 years old he has an eye for beauty. Thank you again for coming out Stan. 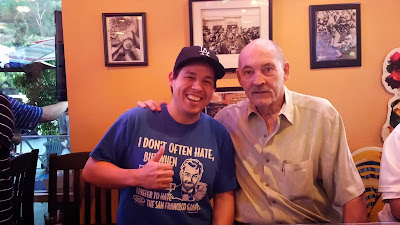 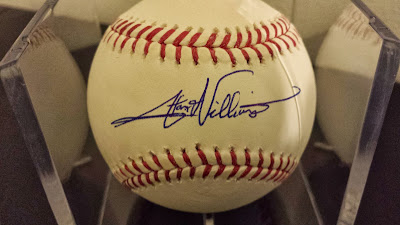 On the way out my wife noted a cardboard cutout of "The Most Interesting Man in the World" by the door of the restrauant. Since I was wearing my favorite anti Giants shirt she thought it would be funny to get a picture with the cutout. Dislike for the punk ass orange team from up north also never takes a break during the year. 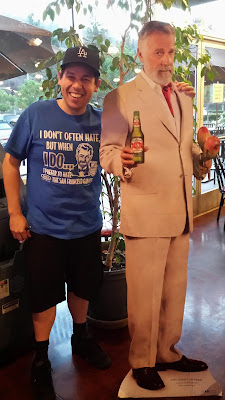 Posted by DodgerPenguin at 9:14 AM